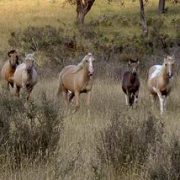 This time we are not talking about the endangered wild horses of America. The many problems concerning the Mustangs are already at the focus of attention and discussion.

Today we will concentrate on the wild horses of Australia:

Perhaps we don’t realize it, but – apart from a real kangaroo we are most likely to come across wild horses when we are in the outback of Australia.

Queensland and northern Western Australia – Home of the Brumbies

Most of the Brumbies live in the still sparsely populated north of the continent, so that you would probably encounter them in Queensland and northern Western Australia. 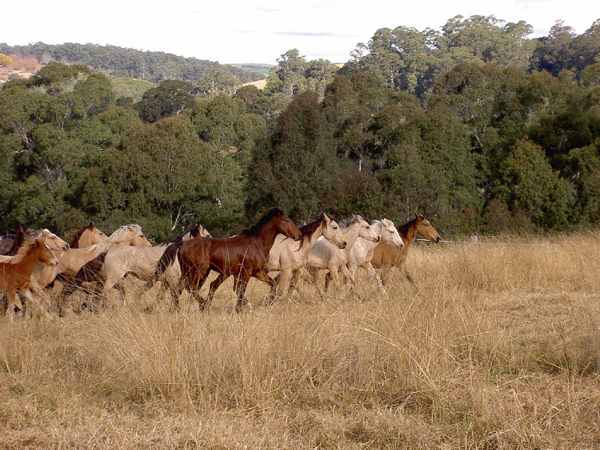 These horses feature some unique characteristics:

As they have always been on their own, they have learned to take care of themselves. They live their life in a herd, and this stable structure with firm rules ensures that they help each other at all times. This self-help has a second, equally important component: These horses have learned to propagate continually. 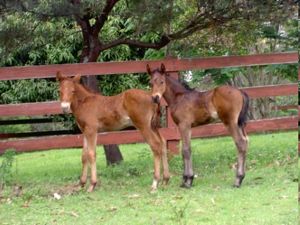 DNA tests have shown that Brumbies go about it with a great deal more intelligence than some thoroughbred horse breeders: Inbreeding is much more widespread in thoroughbreds than it is in these isolated wild horses. But this is only one of the arguments why these horses are being assigned a special intelligence. As a wild horse it has to learn how to survive in a world full of humans who are shaped by market economy. To find the way in an ever changing environment takes real sophistication and well-developed perception. Their eyes tell us of the strong will power and singular temperament that they exhibit.
Their body language tells of constant alertness and strength. Watch the video……  These horses are said to be extremely agile, fast, and wild, demonstrated by their flawless conformation, strong bones, and very sturdy hooves. 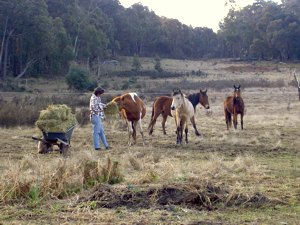 Brumbies in the Past, Present, and Future – Australians tough Survivors

Without a doubt the Brumbies are a vivid and vital component of Australian history. They came with the first settlers, who brought the first seven horses to the continent in 1788. These mares and stallions were tough survivors: Not only did they have to endure the strenuous and lengthy passage, but they also had to adapt to the extreme weather fluctuations that exist in Australia. In the summer months they lived in driest heat, during the winter in bitter cold. Only the toughest horses could withstand these extreme conditions, along the phrase “survival of the fittest”.

The wild horses probably have their name from Sergeant James Brumby. He was one of the first settlers on this “new” continent and left his horses to the Australian bush when he transferred to Tasmania. By the sheer will to live these horses learned to take care of themselves and became known more and more for the their endurance and resilience. Because of these traits mainly Brumbies were deployed in World War One and Two and many of the wild horses lost their lives in the war.

Nowadays there is no war but Brumby Horses are more endangered today than ever. Completely unprotected by the Australian government the Brumbies are exposed to hunters who will, if they are lucky, shoot the horses right away. In the worst case they first get transported to the slaughterhouses under absolutely horrible conditions. It is impossible to get an exact number as to how many horses exist, however, there are thought to be several thousand free-roaming Brumbies at the moment – with a big downward trend in population size. Yes, these wild horses are really hunted and even shot down from above by helicopters. They face death almost every day. A peaceful existence, as was the case a hundred years ago, is absolutely impossible. The Australian government
does not feel responsible in this matter and simply will not intervene. While this unique horse breed is moving closer towards extinction very few are willing to face the problem. Apart from a few small horse rescue organizations only “Save the Brumbies Inc” has taken up the cause to save these horses.

The Future looks not good for the Brumbies 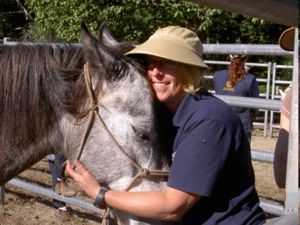 The future looks bleak for the Brumbies despite their importance for the horses of this world. Up until now the north of Australia has been mostly unpopulated. At this point though, human settlements are getting denser and can’t be stopped. The habitat of the Brumbies is shrinking continuously and there is less and less room for them to feel safe.
The Brumby could become an important link to the horses in our stables: As our horses are getting more fastidious and lose a real sense of freedom that the wild horse has, crossbreeding with the Australian Brumby could put renewed temperament, will-power, and endurance into the domestic breeds. If the hunters really succeed in bringing the Brumbies to extinction, important genetic information would be lost with them and couldn’t be retrieved any more.

Organization: Save the Brumbies Inc 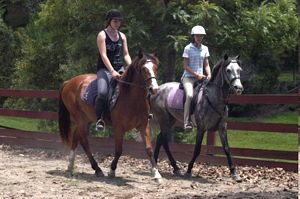 The organization Save the Brumbies Inc presents a small glimmer of hope in this dark chapter of the current Brumby situation. The organization is dedicated to protect the wild horses from extinction and fights for this cause. Foremost “Save the Brumbies” denounces the government for the cataclysmal situation: Instead of taking the USA as an example, a country that has had a law to protect the wild horses for the last 30 years, the Australian government doesn’t take the declining Brumbies on as a national problem. It sees no need, therefore, to control the wild horse population.

The organization has the following goals:

To achieve these goals “Save the Brumbies Inc” has already established some projects for the protection of the Brumbies. The first measure was the creation of sanctuaries, where Brumbies can live in security. In 2007 the NEBS (New England Brumby Sanctuary) was established in New England, New South Wales. On this pristine piece of land the Brumbies find peace and can live freely in their herds. In addition, the most suitable mares and stallions are chosen to guarantee the natural reproduction of the Brumbies. Apart from this large sanctuary there is a smaller one in Bellingen, New South Wales. Both sanctuaries are open to tourists and a visit is definitely worthwhile. Here a little foretaste 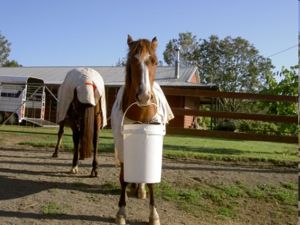 Apart from creating sanctuaries, the horse relief organization has introduced a Brumby adoption program. After a thorough assessment horse lovers can adopt a Brumby, thereby helping to preserve the breed. These horse rescuers have already helped a great many Brumbies as is attested in a few really moving stories. Just as any relief organization, they depend on outside help and are grateful for any donation.

Please help, as others do, to save the wild horses and protect them from extinction! After all, it is a matter of it preserving a unique horse breed and therefore concerns all us horse lovers.

It lies beyond the Western Pines
Towards the sinking sun,
And not a survey mark defines
The bounds of “Brumby’s Run”.

On odds and ends of mountain land,
On tracks of range and rock
Where no one else can make a stand,
Old Brumby rears his stock.

A wild, unhandled lot they are
Of every shape and breed.
They venture out ‘neath moon and star
Along the flats to feed;

But when the dawn makes pink the sky
And steals along the plain,
The Brumby horses turn and fly
Towards the hills again

The traveller by the mountain-track
May hear their hoof-beats pass,
And catch a glimpse of brown and black
Dim shadows on the grass.

The eager stockhorse pricks his ears
And lifts his head on high
In wild excitement when he hears
The Brumby mob go by.

Old Brumby asks no price or fee
O’er all his wide domains:
The man who yards his stock is free
To keep them for his pains.

So, off to scour the mountain-side
With eager eyes aglow,
To strongholds where the wild mobs hide
The gully-rakers go.

A rush of horses through the trees,
A red shirt making play;
A sound of stockwhips on the breeze,
They vanish far away!

Ah, me! before our day is done
We long with bitter pain
To ride once more on Brumby’s Run
And yard his mob again.

Here you can help: