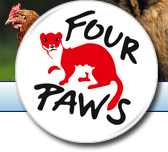 Wild horses in such a denseley populated area as Europe? Yes! Only a few people know about this and even less try to help this threatened species. 2500 wild horses live in the Donaudelta in Romania – and the local authority decided to shoot down exactely these 2500 wild horses. The SPCA “Four Paws” arranged a program to rescue their lives – and gave them back hope.

Romania – member of the European Union and therefore part of a big economic nation. Nevertheless this country still is spacious enough to give a habitat for a whole wild horse population. They found their habitat in the Donaudelta which represents a real paradise for flora and fauna. However, environmentalists saw a real danger for rare and prevented plant species which have their original habitat in the Donaudelta- and the local authority got pressurized to allow the shooting of the horses. Until today this never happened because the SPCA “Four Paws” was able to postpone this decision. This article wants to inform about the Romanian Wild Horse and about the rescue programme established by “Vier Pfoten”.

Persistent and tough – the Romanian Wild Horse has learnt to prevail

Like every other wild horse population the Romanian wild horse had to learn quickly to survive in nature. Originally they were workhorses in the kolkhoz: in this agricultural farming they worked on the field and had to pull heavy carts. The workers really needed them so that they were useful and valuable. Then, the industrialization began in the late 1960 s. This development was supported by the Romanian and Western-oriented head of gouvernment Nicolae Ceausescu. Referring to this after some time the kolkhoz and therefore the horses lost their sense and use. The horses were left in wild nature and had the possibility to develop to real wild horses. On this natural way they learnt to live in herds and to survive in the hard conditions of the wildnis. Today the population of the Romanian wild horses counts 2500 members.

As their habitat they choose the unique nature of the Donaudelta. This is the intersection between the European and Asian Fauna so that it represents the habitat for many rare plant species. Nevertheless for the wild horses the Donaudelta only is a suboptimal habitat: the rare number of plants offers a lack of food what causes real essential problems.

Environmentalists claim for the death of the wild horses

It may seem contrary: environmentalists and the local authority work together. Normally conservationists fight for nature what means for plants and animals. But in this special case they see a real threat for rare plant species and understand their function as an attorney who fights for the existence of this unique fauna- and against the wild horses.

The Romanian wild horses still are alive- thanks to the SPCA “Four Paws”. This organisation arranged immediate measures and saved the lives of the horses. In winter 2010 they already helped with an additonal feed ration: more than 100 tonnes have been carried to the Donaudelta preventing a real extinction of the wild horses. This additional feeding only is a part of the rescue programme. Experts for wild horses and veterinarians will form a team which controls the following measures for a prevention of the wild horse population:

Generally the main aim of “Four Paws” is clear: horses and nature need to live in a natural harmony. The horses may stay in the Donaudelta without threaten the existence of rare plant species.

Nevertheless the lives of the wild horses still is in danger: the number of environmentalists even increases and due to this also the local authority gets more pressurized to allow the death of the horses. Therefore the rescue programme is no sustainable guarantee for the survival of the wild horses. It was able to alleviate the dangerous situation. A sustainable save situation for the horses needs an implementation of all points of the rescue programme.

The SPCA “Four Paws” asks for donations and help. Due to the additional feedings and the veterinary controls the organisation expects  an expenditure of about 100 000 Euros in the first year.

Now its your turn: a little donate can already help to save the wild horses. And not only all single lives of these rare animals but also a real culturale possesion!

Here you can find more information about the SPCA “Four Paws”.