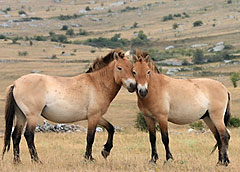 The Przewalski’s Horse is the last wild horse, which has not been crossed with any domestic horses. This is why people call it the last original wild horse alive.

Other wild horses like the Mustangs in the USA oder the Brumbies in Australia originate from domestic horses, which had the possibility to escape into wildlife what means into liberty. In opposite to this the Przewalski’s Horse does still have his origins in the wild horses. 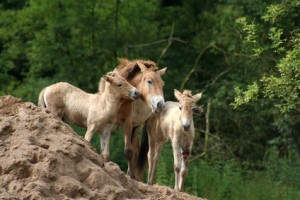 Topical research says, that our todays domestic horses originate from the Tarpan and the Przewalski´s Horse.  The Tarpan has his habitat in Middle- and East Europe and around the Black Sea so that lived in woods and velds. In opposite to the Tarpan only the Przewalski´s Horse could survive without any crossing with domestic horses. According to this the Przewalski’s Horse still has its original charakter traits and genes.
The orignal habitat of this horses is the Eurasian veld so that they were prevalent in Mongolia and China. Ever since this horses had a great importance for the Mongolian nomads. These nomads were dependant on the horses due to their energie and power. This special relationship becomes clear when the nomads called them „Takhi“ (Mongolian word for „holy“). 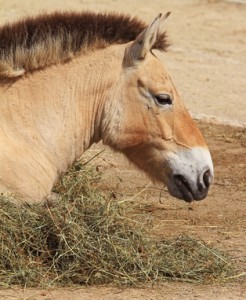 The Przewalski’s Horse has a Special Physique

The Przewalski’s Horse has a special physique and one can easily see the differences to a domestic horse. Normally Przewalski’s Horses do not have a withers of more than 147 cm. Additionally their strong bones and the thick neck let them appear tough and robust. Characteristical they have an eel back and a spezial coat with colours like grey-yellow or red-brown. The impression of a tough little wild horse becomes completed through the dark tail and mane as well as through the massive and big head.

The Habitat: Meager Steppe and Plateaus

The habitat of the wild horses is in the velds of Mongolia and China. Due to this also areas like Dzungaria or Tachin-Shara-Nuruu count to it. Both areas are meager plateaus with a lack of nourishment and water. The hard ground exists out of stones and pepple so that strong feed became another characteristic of the wild horses. But even if the lack of nourishment was a great problem the horses still had other hard conditions to bear.

The velds have a rough climate with temperatute and weather fluctuations of up to 25 degrees. In addition to this the horses had to share the area not only with nomads, but also with other tough mammals like the wolf, Mongolian ass or Saiga Antelope.
Undoubtfully the living conditions for the animals were really hard and not easy to bear but trough the years they learned to live with and adopt to it. That is why they were able to stay without water for maximum of four days. Compared to our horses – unbelievable! But this is only one clear difference between a wild a domestic horse.

Like all other horses Przewalski’s Horses are gregarious animals and live in an organised clan. Either this clan is a family herd, which is lead by a boss mare, or a herd which only exists of stallions. Boss mares are responsible for leading the group to places of nourishment. Besides this boss stallions protect their herd against natural enemies and may cover the mares of the herd. Young stallions which have reached their puberty have to leave their family herd so that they were chased away.

Then, all young stallions come together and found their new herd. Interestingly, not only stallions have to leave their herd, but sometimes also young mares. They have the option to become a new member of another herd or found a new family with another young stallion. In this case offspring does not wate for long. Lead through their natural instinct mares give birth to their foals between the end of april until the end of july. In this time of the year there are the best climatic conditions and the highest richness of nourishment. Foals who are born in this period of time have a surpassing chance of surviving than foals who are born in winter.

Basically, one can not only describe the horses character as tough and robust but also as very aggressive. Due to the hard conditions in wild life stallions have a much higher protective instinct than domestic stallions. Other wild animals who could present a possible danger for the herd become beaten by the boss stallion. Additionally mares who were taken from wilderness showed a high aggressiveness: more than once they attacted young foals from foreign species and sometimes they even beated them till death. A very brutal instinct, but obviously necessary for the survival in wilderness. 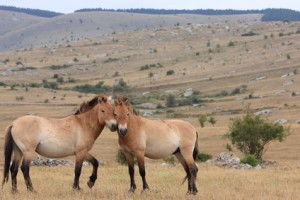 Wild horses who still live free in their natural habitat – is this still possible? Is it possible in times where humans want to rule the whole world and intervene  everywhere into nature? Undoubtfully there were times where nature could just be nature and wild animals had a safe place to live. But finally even the Przewalski’s Horses in the Middle on Mongolia did not have any chance to escape from human influence and expension.

In the beginning of the 20. Century Mongolian shepherds who were accompanied by their cattle entered the area of the horses. This fact and the very long and cold periods of winter in 1948 and 1956 made the problem of nourishment even worse. But the long winters did not only cause a lack of nourishment: shepherds lost their cattle so that they began to hunt the wild horses. Since that time the horses were not save anymore and had to watch out for the hunters gun. Unfourtunately, technical advance produced modernised weapons what supported the success of the hunters. The horses lost their habitat and a place to hide. Finally in 1969 the last Przewalksi’s Horses has been seen in wild life.

In 1969 the last Przewalski’s Horse has been seen in wild life but nevertheless this wild horse species did not become extincted. The reason for this was a trend in the beginning 20. Century when wealthy people began to collect rare animals and flowers. Friedrich von Falz-Fein owned a large property near the Askia Nova Reserve and was one of the first persons who welcomed the wild horses on his own property.

Generally since 1900 the Przewalski’s Horses were trapped and selled to private collectors, animal salesmen and zoos. The way the wild horses were trapped was totally brutal: mares of young foals were just shoot down. Domesctic mares who lost their foals should fulfill the role of a foster mother. Naturally this plan often did not work out because foals refused to drink the milk of the foster mother so that they were not able to survive. Nevertheless, between 1899 and 1904 all in all 54 wild horses were trapped. Caused through long times of transport and the immense change of habitat and life only 13 horses survived.

That is why we say that todays population of the Przewalski’s Horses is founded on this 13 animals. Breeders wanted to avoid inbreeding so that during the long period of time Mongolian domestic horses were crossed with the wild horses. The oldest tradition of Przewalski’s breeding is in Prag where one can also find the international stud book of this specie.

Similar to the situation of the Brumbies or the Mustangs also Przewalski’s Horses shall return to their original habitat. Since 1990 three different projects try to lead the animals back to liberty.

The first one is located in the Reserve of the Hustain Nuruu which is in central Mongolia. Between 1992-2000 all in all 84 horses were brought here. The two institutions MACNE and FPPPH observe the project and the animals. Through this the Przewalski’s Horses cannot cross with domestic horses and are protected from natural enemies. The landscape of the Hustain Nuruu represents the original habitat what increases the number of population. These good conditions lead to a number of already 200 horses in 2005.
You can find more information about the project here.

Additionally the Takhi Group leads a project in the Gobi area. This project does not only return the horses but also the nomads to their original habitat. And even if life conditions are hard and there is a lack of nourishment in 2005 already 100 Przewalski’s Horses lived in this area. For this project you can inform yourself on this website.

The third project is located in the biggest veld in whole Middle Europe. In the Hortobágy-Puszta in Hungary members of the zoo in Cologne analyse the habits of eating and the social organisation of the horses. The results of these analysis may help to improve the other projects so that they have better chances of success. The wild horses shall return to their original habitat – and if this happens a great part of natural creation is back.